​As a Deep Tech start-up QuarkStar has successfully taken on substantial scientific and engineering challenges, creating in response an ecosystem of radically new tech. These technological solutions, addressing key problems in solid-state lighting, have in turn generated substantial intellectual property.


Who are these Innovators?

QuarkStar’s early members included the recognized pioneers of the field, already instrumental in beginning the solid-state lighting global take-over. In the process, they saw what was required next to truly take advantage of its many opportunities, and to solve the growing pain problems that accompanied this new technology.

Together with some of the most talented younger persons in the field, the team as a whole delights in innovation!

Catalyzing each other as team members this combination of experience, foresight, and unfettered thinking from outside the field allowed them to predict not just the LED’s applications and trends –  but to envision radically new technologies that take optimal advantage of LEDs.

Rather than simply continuing down old technology paths, the QuarkStar teams pioneered even more new ways to harness the LED – and the concepts and ideas that we have recognized early on and secured are now coming into their own in the commercial marketplace.

It encompasses trends that QuarkStar anticipated well before the rest of the industry, and our lead time was used to prepare and fortify a strategic portfolio unheard of for a small start-up.

What Technologies are in the Portfolio?

From LED packages and modules, to luminaires and systems of luminaires under intelligent control, QuarkStar’s IP portfolio covers multiple layers of technologies that are mutually compatible – yet independent from older proprietary technologies (see following 2 figures). 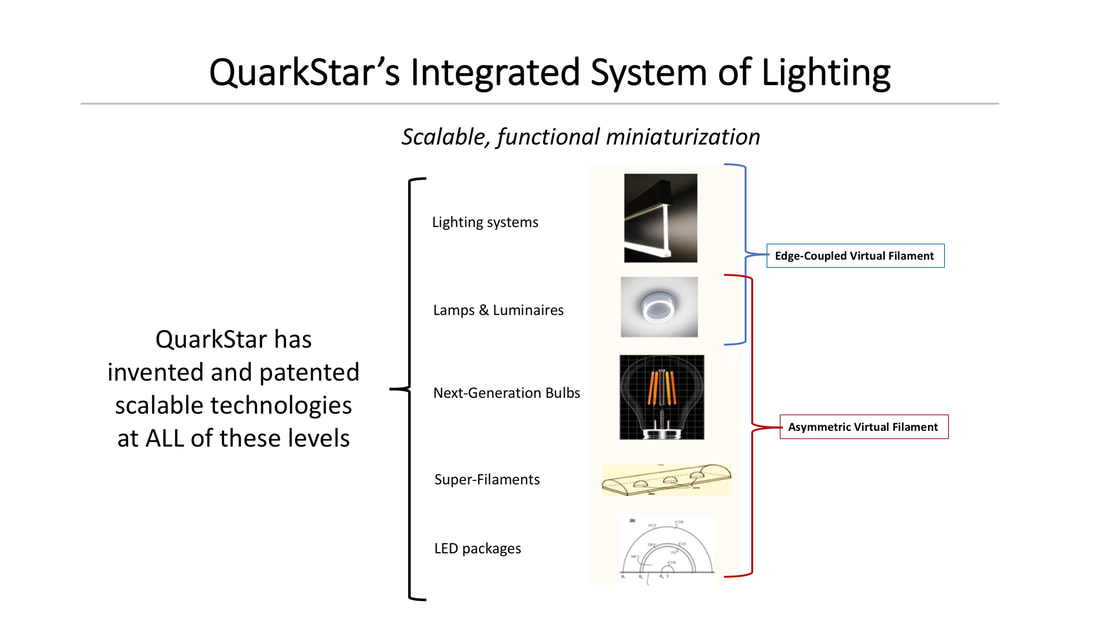 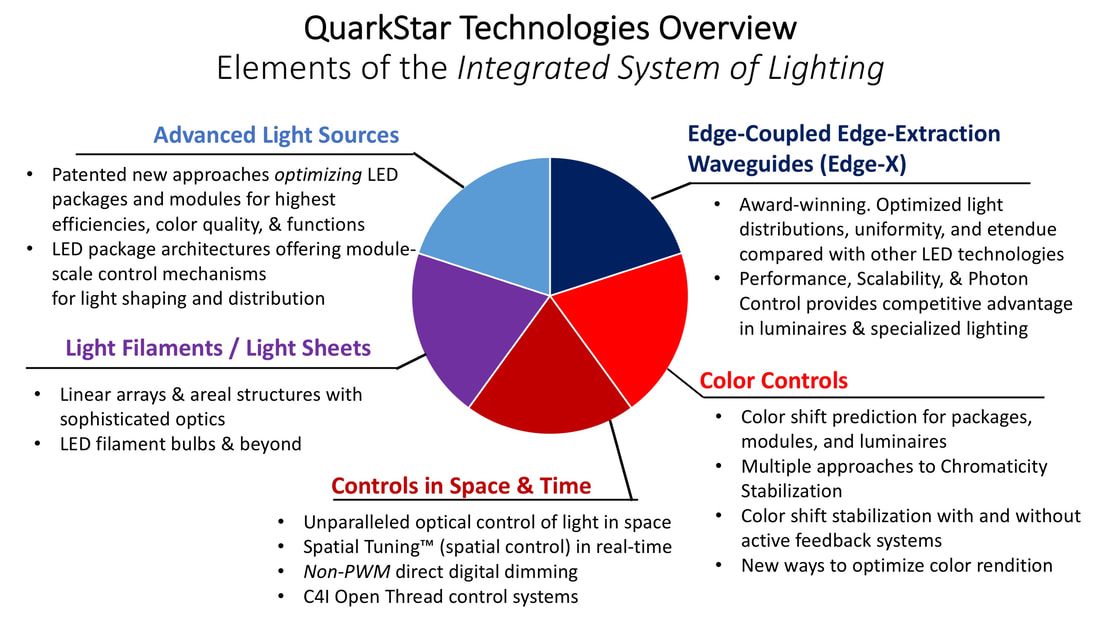 Is All This Innovation Necessary?   YES, Because This Time It Really is 'Different' !

Since the invention of the incandescent bulb, there has been little appreciable advancement in the surrounding optical technologies. Even now, though LEDs have a luminous flux density/volume ratio of over 100,000x greater than previous lighting technologies (see figure below), the industry is still using the standard toolbox of reflectors and shades, diffusers and prismatics from the last 50 years culminating in luminaire designs of “spots and dots in boxes”. 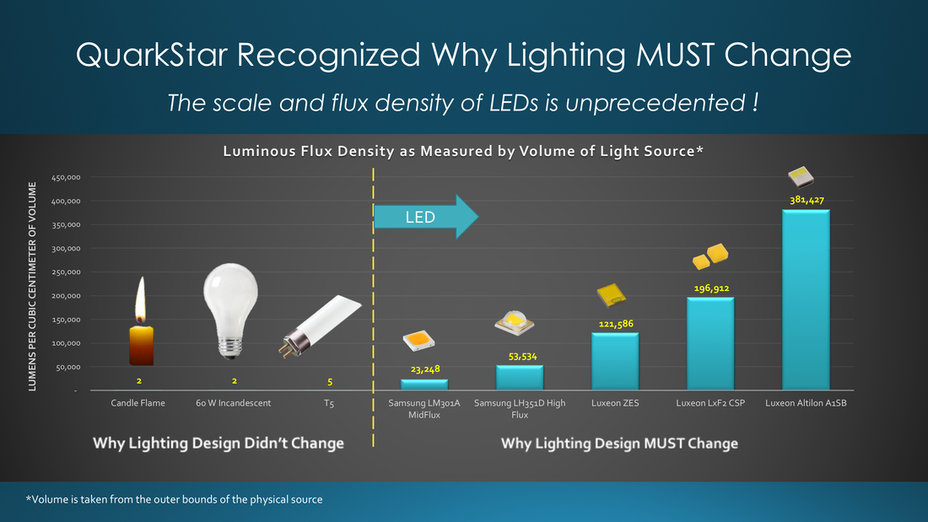 The predictable result is a $120+ billion global market with so little protectable differentiation that the entire industry is sinking in a race to the market bottom. Despite robust sales (the need for artificial lighting only grows with global urbanization) robust profit margins are a thing of the past due to a globally cross-licensed and standard manufacturing approach lacking differentiation or competitive advantage.

By focusing on solving the problems of solid-state lighting through new ways to control and shape light, previous challenges like glare-control become much more manageable. So too are there cost benefits in design, manufacturing, and operation. As indicated by the DOE’s recent transition from the past decade’s focus on LED efficacy to the broader issues of Quality of Light…QuarkStar’s approaches are increasingly relevant to creating competitive advantage.

Examples are the QuarkStar ability to create pristine and uniform lines, planes, and volumes of light rather than high-intensity spots and dots, and miniaturized luminaires that can be so well integrated into surrounding architecture as to be virtually hidden. As such there is immediate relevance to multiple markets and verticals, including many of those with the highest profit margins.

And while making the light itself more useful and even beautiful, QuarkStar innovations (along with supporting IP) enables cheaper manufacturing opportunities than the universally shared conventional approaches to LED lighting. In a world without profit margins, this is another of key advantage.

QuarkStar has grown its substantial patent portfolio from scratch, acquiring only one outside patent.

Following cutting-edge IP strategies, QuarkStar has:
•    Kept all awarded patents in force;
•    Maintained pending applications in all families across the US, many in EP and CN, and core IP ones in JP;
•    Secured defensive publications;
•    Prosecution success in over 90% of applications;
•    Filed several omnibus applications, each including multiple inventive concepts

Regionally, QuarkStar’s IP focus is on the United States, Europe, and China. IP in Japan is pursued for core technologies. QuarkStar's omnibus patents and core IP have now been allowed in all four of these global regions. 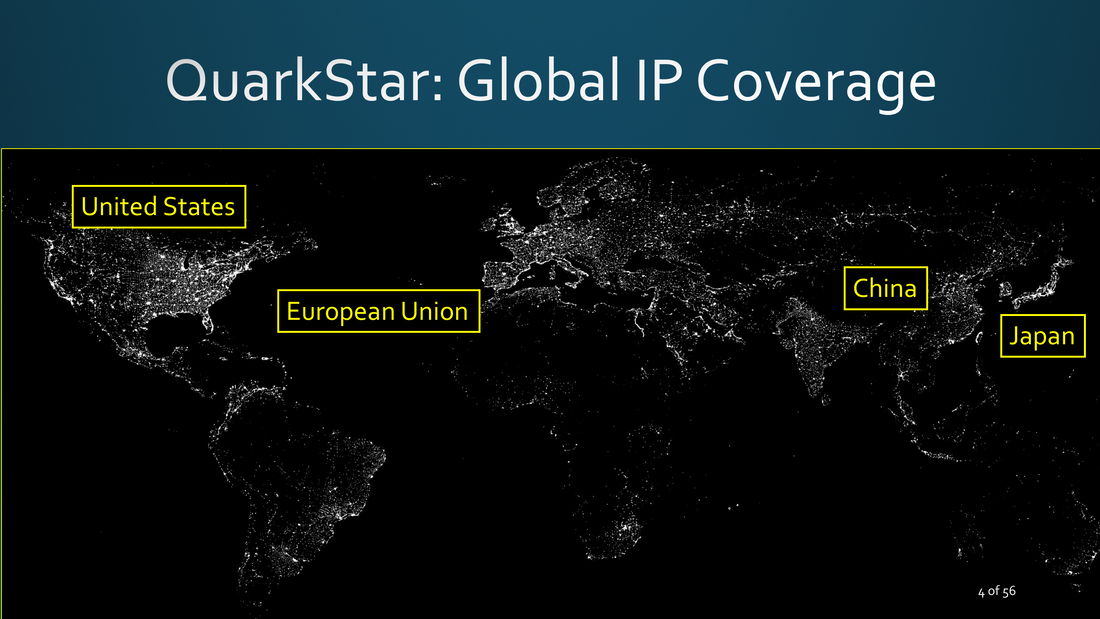 QuarkStar’s patent portfolio has been designed, from the ground up, as a strategic business tool. Its primary mission is to protect these core, application, and system technologies that are crucial to advance high-margin lighting sectors across the value chain.

The portfolio has reached a robust U.S. presence where it continues to mature, providing numerous patent engineering opportunities in both the lighting market and emerging verticals such as LiFi, IoT, horticulture, autonomous vehicles, and others.

An Example of Industry Breadth

In between the scales of fixtures and super-packages, QuarkStar innovations even cover the re-invention of the most compact of light fixtures – downlights and bulbs. 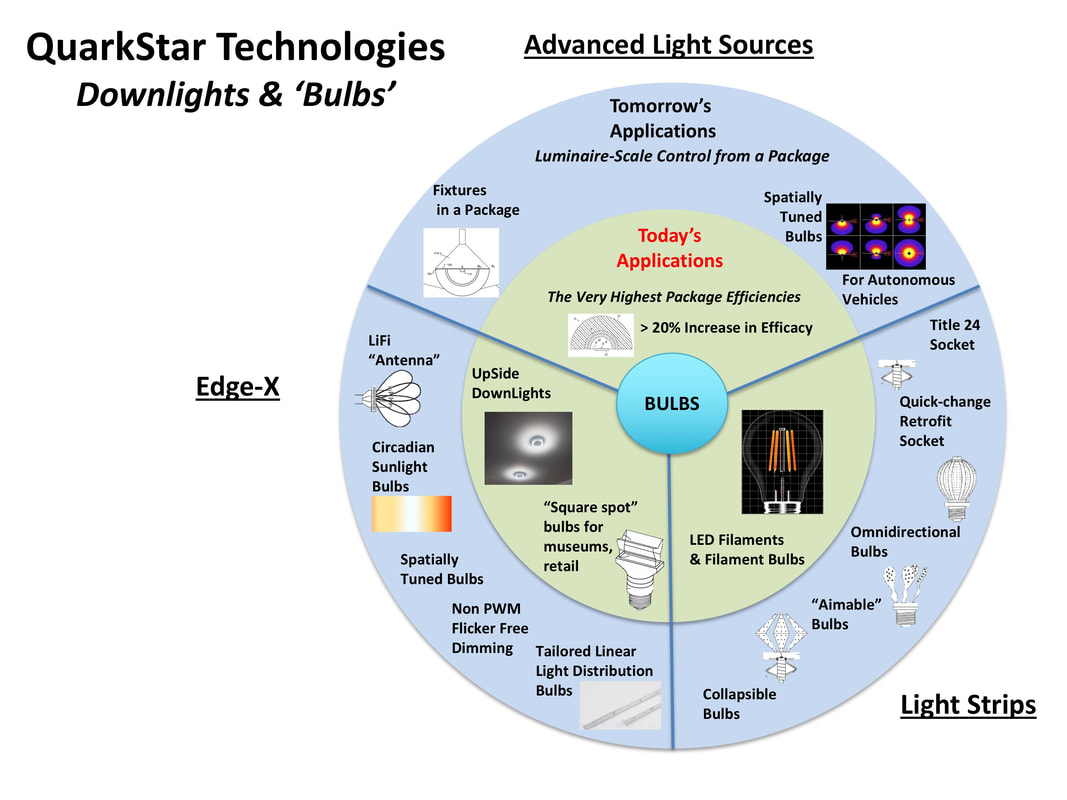 In downlights, QuarkStar has literally re-invented the traditional 75 year-old downlight. Whereas all other competitors "live down" to the name and solely direct light downwards toward the floor, QuarkStar’s ‘UpSide-Downlight’™ can also provide an indirect component reflected off the ceiling (or wall) on which it is mounted. It won a major international innovation award when introduced at Light+Building and can be seen here. Its first products in the marketplace are expected to be released in the middle of 2022.

And in the bulb market, QuarkStar IP includes the architecture of ‘filaments’, the use of such in different ways in bulb formats, and enhancing both efficacy and functionality of bulbs. High-value applications include autonomous vehicles and bulbs tuned to functions supporting health and well-being.

Because emerging applications require integration with infrastructures in new ways and at new scales – new patent opportunities are amplified and compounded by QuarkStar’s unique ability to scale down in size.

This scalability not only enables new applications and capabilities, but most critically brings previously downstream functions and capabilities upstream – enabling luminaire-level capabilities on the module level, and module-level capabilities on the package level. There is even QuarkStar IP that covers luminaire-like distributions at the package level – essentially fixtures in a package. All of this results in significant economic benefits – including significantly lower cost manufacturing of the final products.

In the global transformation to solid-state lighting, QuarkStar’s goal has been to create and own the tools (the technologies and the IP) for our partners to win the battles of a highly disrupted SSL industry undergoing the LED revolution.